Hello and happy Monday once again. Time to start another week. Bring it on. It's 5:50am which may seem like an awfully early time to be posting, but I'm just sitting here eating breakfast so why not type between bites? Plus, I'm just so excited to share my latest project. Like I said yesterday it involved three pretty Goodwill plates, Mod Podge, a plastic basting brush, and black party napkins from Dollar Tree. Here is the end result: 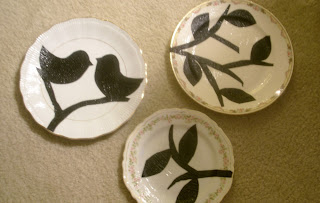 So what do ya think? I'm pretty pleased with how they turned out and the fact that they're one-of-a-kind. I got my inspiration from Frugal with a Flourish. She always has such pretty inexpensive projects. Now, Here is how I crafted these babies.
Decoupaged Plates
I began by wiping down the plates with Clorox wipes so ensure that the Mod Podge wouldn't have dirt in it and to kill any germs that the previous owners may have left. You just never know...Then I cut my birds out of the black party napkins using a stencil I'd made from a Christmas greeting card and freehandedly cut out the branches and leaves. I used party napkins because the Dollar Tree didn't have any black construction paper. After my pictures were cut out I covered the plates in Mod Podge, laid my pictures on them, and covered my pictures with more Mod Podge. I just love how they turned out. I plan on hanging them up on our wall of frames. I'll definitely show pictures when that focal point wall is complete. My husband says that he thinks plates hanging on walls are really weird, but he's a good sport and is going to put up with having plates on his walls. 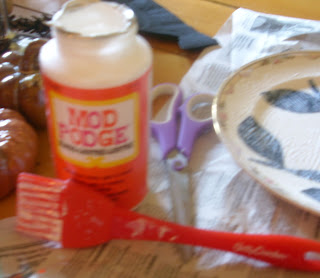 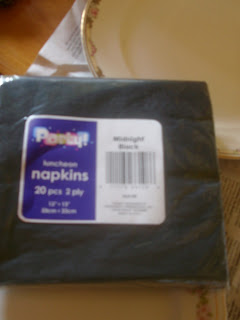 I was distraught when I discovered that Dollar Tree had no black paper but, I'm learning to improvise. 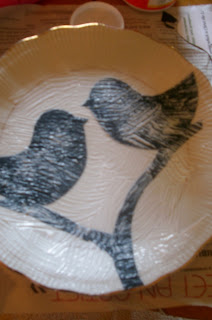 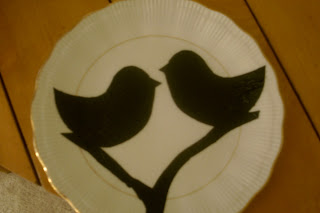 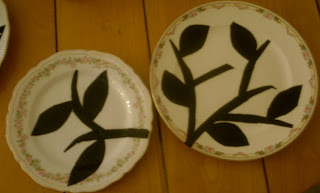 All finished
Linking to The DIY Project Party Monthly Contest
Posted by Anna at 6:18 AM