Cake balls are a big trend right now. No surprise. They’re delightful. What’s better than cake and icing rolled into a ball and dipped in chocolate? Um nothing. I had them for the first time when my sweet, and clever friend made them for my bridal shower. My husband is especially enthralled by them. Whenever we go to the Indie market here he leaves me with wreckless abandon and makes a b-line for the bakery stand selling cake balls left and right. Normally I think I'll have a tough time getting him to accompany me to the Indie market, but at the mention of cake balls, he’s ready and rearing to go. Knowing his love for these sphere-shaped tasties, I decided to make them for Thanksgiving at my parents’ house. 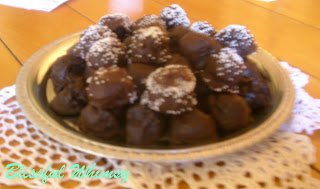 Here is my first cake ball journey...
I started with a Devil's Food cake mix and made a rectangular cake following the directions on the box. Easy peasy. 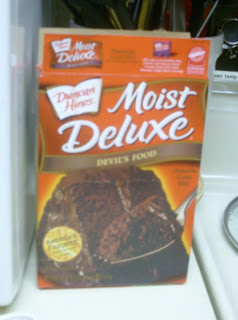 When it came out I cut it up to cool some then crumble it all up in a bowl. 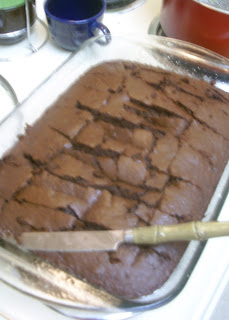 Then it was time to make the icing. It being Thanksgiving and all, I decided to make a some sort of icing with a pupkin flavor. Here's what I decided on:
Pumpkin Cream-Cheese Frosting

When the icing was done, I had a crumbled chocolate cake and some DELICIOUS frosting that needed to be mixed together. 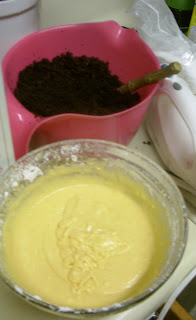 I poured the frosting in the bowl of cake crumbles, mixed it all up, and there it was, one of the most delicious combinations I have ever tasted and I wasn't even finished. I wish that I had immediately put this mixture into the fridge but instead I attempted to make a few balls out of it and dip them in melted chocolate. A horrible idea. My husband said they looked like animal droppings, which they did. So I put the cake and frosting combo in the fridge to cool for a while and made the chocolate to dip them in.
For the chocolate coating I used a combination of dark and bitter sweet chocolate chips I zapped in the microwave with a splash of vegetable oil. The oil helps to make the chocolate smoother.
After the dough had chilled and my chips were melted into smooth chocolate bliss I began rolling my cake balls, dipping them in chocolate, and setting them on plastic plates I sprayed with cooking spray (I refused to go buy wax paper though I know it would have made the whole ordeal easier. 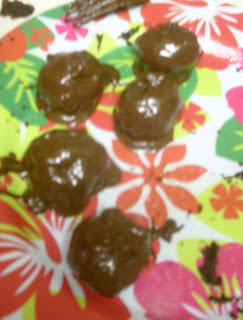 When I filled up a plate I put it in the freezer for a little while and then the refrigerator. Upon getting up this morning I scrubbed dishes and straighten up the kitchen. After the cake balls were done my kitchen was an aggravating mess. 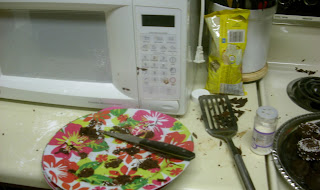 The cake balls do look pretty they and taste so darn great. Only a few have sprinkles because I didn't realize I had these leftover sprinkles until I was almost done. 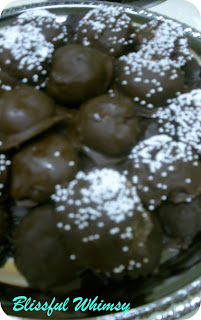 I hope my family enjoys these tomorrow because, as pretty and yummy as they are, the only time I'll probably ever make these again is when I'm old, retired, and have nothing but time to kill. In other words, they took a very long time to make. So, anyone out there who makes cake balls, especially as a job, I admire you. I love my husband, but after this, he'll only be getting cake balls from other people.
Posted by Anna at 2:45 PM